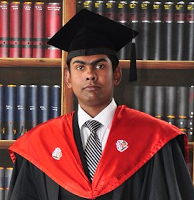 In December 2008, I achieved the greatest opportunity and a gift that I had ever dreamed in my life. I became a Cisco Networking Academy Instructor for IT Essential. I was the first and one and only instructor for ITE in the National Youth Services Council (NYSC) and nevertheless I was the youngest ITE instructor in Sri Lanka at that time. I have trained more than 500 ITE students during the period 2009 - 2012 through LAVTC.

2010 – 2012 was the chromatic and cumbrous time period of my career life. I was almost there to certify as a CCNA (Discovery) Instructor and missed many training opportunities because LAVTC was a small vocational institute and the management was not ready to give that big responsibility to a new and young employee with the government bureaucracy.

Finally, in 2011 I got the opportunity to become the youngest CCAI for CCNA in Sri Lanka. How do you feel, if I say as the youngest CCAI and newly became instructor I have managed to bring the 1st place in the National NetRiders Competition in the same year 2011? Not only that, my students became the 2nd runner-up in the APAC regional NetRiders competition as well. Still I don’t have any words to explain the joy I had on that day. I recall that moment all the time when I face any tough time to motivate myself.

I have started the year 2012 in a victorious way because I had the opportunity to win the 1st price in the SAARC region for the packet tracer activity on the teaching resource competition(TRD) 2012 organized by Cisco APJC instructor forum. The priceless 32GB iPod is still with me that I got as the gift for the ‘Mission Netacad 2012’ packet tracer activity in that competition. That was the first international recognition I got for my capabilities as an instructor.

I have been working as an instructor but I didn’t stop my education and career development. I couldn’t enter a government university to do my first degree and I didn’t go aboard to finish it as I planned previously. But I could obtain internationally recognized BSc (Hons) Business IT through University Greenwich (UK) via a local partner with upper second class in 2012 February. Since 2009 I spent my weekends to become a graduate and after 4 years I succeeded. Not only the BSc I obtained but also the CCNP R&S certificate I bagged in the same year 2012.

Copyright © 2018 Sarada Hettiarachchi
Thanks to Premium Themes and Blogger